Powder Mildew in the Organic Garden

This was a bad year in the Mid-Michigan area for plants susceptible to Powder Mildew (PM). Many organic gardeners lost their squash, pumpkins and cucumbers to this menace. This fungal disease becomes evident on the leaves of plants in the form of a chalky white powder. When conditions are right it can spread through the leaves quickly, killing them and ultimately the whole plant.

My garden was attacked also but I went to battle and saved most of my plants. I wasn’t going to let this fungus steal away the joy of eating my delicious organic yellow squash and zucchini.

The cure was simple and easy. I purchased a 2 gallon pump sprayer, a bottle of Dr. Bronners Sal Suds Biodegradable Cleaner (the purest soap out there) and a bottle of Southern AG Triple Action Neem Oil (organic but highly concentrated). 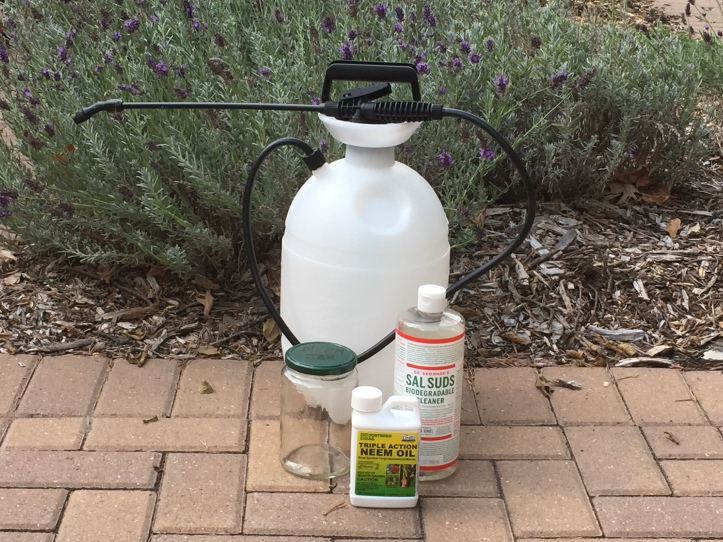 I used a quart jar to mix the suds and neem in, filled it with 2/3rds water, shook it well and then added it to the rest of the water I had already filled my sprayer with. I gave it a good shaking, put on my rubber gloves and was ready for battle.

Mixing the ingredients in a separate jar and then adding them to the bulk of the water prevents over sudsing inside the sprayer.

The plant leaves that had died or were on their way out, I cut off and placed in a paper bag for yard waste pickup. I did not want them added to my compost pile. Every remaining leaf, the stalks and the entire ground they rested on got a soaking. I soaked the entire bed they grew from.

The next day I could tell a difference. Most of the white powder had disappeared but there were still traces and I clipped a few more leaves. The day after that my squash plants looked healthy and vibrant.

This photo is of the day after.

Four weeks later, I needed to repeat the process.

I did lose a couple of weak plants but the remaining ones recovered to produce a nice harvest.

Neem oil and Sal Suds not only treat Powder Mildew but any kind of organic garden fungus. We live near a lake and every year I battle fungus although this was the first year in the 7 years I’ve lived here that I was faced with powder mildew. I use this mixture to spray anything with fungus on it including my fruit trees.

Every year my oregano comes in beautiful and then is attacked by brown spot fungus. I cut it back right to the ground and then soak the area with this mixture. So far, it has always grown back beautiful and fungus free for the remainder of the year.