Deodorants and Antiperspirants, the $18 Billion Hoax

Deodorants and Antiperspirants are an $18 Billion per year industry in the U.S. alone.  Deodorant was unheard of before 1888 and it took an ad campaign in the 1910’s, convincing women that they may “stink and not know it”, for deodorant  to catch on.

Today the industry has it made. Americans are taught from a young age that they must wear deodorant and antiperspirant as not to stink and be offensive. They slather and spray and if it is forgotten they quite often stink. In fact if one sweats due to physical activity or heat regardless of the application they often still stink. Why? Were we created to stink and be offensive to each other?

Deodorants and antiperspirants contain numerous known toxic substances. A toxic substance by definition has the ability to cause serious injury or death.

You should NEVER apply anything to the body to keep it from sweating. Sweating helps the body to maintain a healthy body temperature. Sweating also eliminates toxic substances from the body decreasing toxic overload and  supporting a healthy immune system.

A “Clean Life Style” is defined as living minimally exposed to dietary and environmental toxins therefore bearing a low toxic burden. When living a clean life style, your sweat will be close to if not completely odorless.

Read On…Because the deodorants and antiperspirants you are using are what is making you stink when they wear off!

Here is what you should really be concerned about:

When toxic substances directly come in contact with the skin many of them are able to enter the bloodstream without being metabolized. This means direct and a more potent poisoning of the body without it ever having the chance to eliminate any of the toxins.

Numerous studies have been and are being conducted on the toxic effects of deodorants and antiperspirants.

“Research study blood tests contain many toxic substances that are in deodorants and antiperspirants”. Also, “compounds used in deodorant are absorbed and stored in fat cells.” according to Philip Haney, Ph.D, Editor in Chief of the Journal of Applied Toxicology. “underarm tissue also contains hormone receptors which may react to some of those same ingredients.”

Experts are concerned that compounds in deodorants and antiperspirants may cause or contribute to developmental or reproductive issues. Research also shows some of the substances can mess with beneficial micro organisms that live in your body.

There is lab evidence and research suggests a direct link between some of the toxins used in deodorants and antiperspirants and Cancer.

However, the American Cancer Society and the National Cancer Institute both maintain there is not “conclusive evidence” linking any chemicals to cancer. LOL Consider the source and all they have to lose. Their entire multi billion dollar a year treatment programs are based upon the so called “treating” of cancer with highly toxic chemicals.

*The Personal Care Industry is full of misleading messages and outright false advertising.

(And their evil devastation)

Here is my Testimony

I had changed my diet to all organic and completely natural food. I had switched all my health and beauty products to all natural products (except one). I had gotten the toxic cleaning supplies out of my home and learned to clean with natural substances. But, I had not stopped using conventional deodorant/antiperspirant. Then through more research and support from people I met who did not wear deoderant/antiperspirant, I learned and came to believe what I hope I have passed on to you here. That the product is nothing but an illusion perpetuated by false claims and scare tactics. When you know the way the body works, it makes complete sense not to use deodorants and antiperspirants and that you should not have to.  I stopped using deodorant/antiperspirant and, I stunk! I was a wreck but I had to hang in there and get through the detox period. (My body actually detoxing me from the deo/anti that I had used!) For the first week I washed under my arms with soap and water several times a day and tried to stay away from people as much as I could. The second week I would only smell after actively sweating but it was not foul. It was just a light body odor. The odor and the frequency diminished quickly from there.  I have now been deodorant/antiperspirant free for about 13 years. Now even when I sweat there is no odor. The only time I have odor is when I have indulged in restaurant food that is not up to my usual standards and especially if they use cheap oils. I then will sweat a little and have light odor for a day or two depending. After that, I am odor free again. I live a mostly “clean life style”. I shower and wash my hair every morning. The only time I shower twice in a day is when I have been gardening and am sweaty and dirty. But, I still have no body odor.

My late husband was 70 and a karate practitioner who soaked his gee with sweat and never smelled like body oder and he did not wear deo/anti. My son, 39, a singer, keyboardist stage performer sweats under hot lights and never smells like body oder, does not wear deo/anti and he does not live as internally “clean” as I do. Nor does my mother use deodorant or anti perspirant and she never smells.  In fact, when I tell people I don’t use deodorant they will often say, “Really? You never smell.” Basically, we were not created to smell offensively.

Below is a picture of a 2 ingredient deodorant that we have on hand. There are other brands that would work the same but this is the one we prefer. It always works if we need it. It will not stop you from sweating but the mineral salts kill bacteria that may create a smell from your body detoxing. This will help you through the transition if you should decide to give up using the toxic deodorant/antiperspirant you have been using. 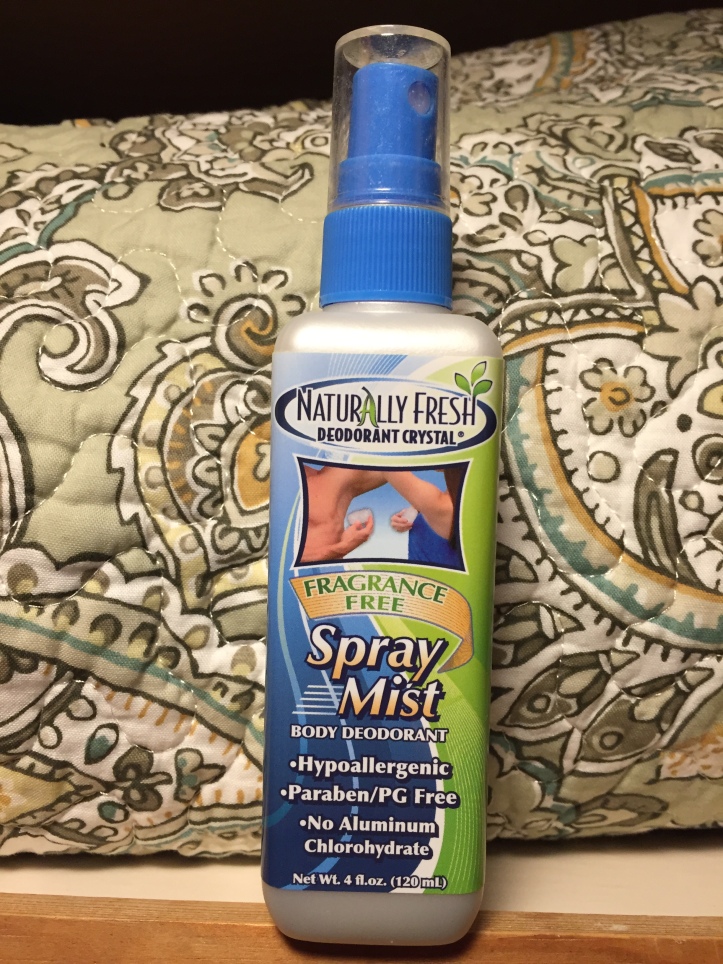 Some people with very sensitive skin experience a rash from the mineral salts.